I watched the presentation, Bullying Prevention by Emily Lovegrove.

Emily was diagnosed on the autism spectrum and runs her private practice. She works with autistic children and young adults giving them strategies on anti-bullying.

Before we head onto the main content I just want to make it clear, that I am not an expert on the topic of autism, especially bullying. This content is a medium to learn about autism. Bullying is a sensitive topic and I will try my best to disc

If you are in New Zealand and you are concerned about your child and bullying at school, please contact your child’s school about their bullying prevention policy. You may also contact your nearest Ministry of Education office for guidance.

I will put the link in the description too.

If you are not in New Zealand, the same principle should apply, any concerns about bullying at school, your schools must have some form of policy about bullying prevention.

This is Lloyd I AM and you are listening to Takiwātanga, love not cure, exploring autism one strength at a time.

Early humans were believed to roam the surface of the earth in approximately 300,000 years ago. Since then, the way humans have responded to threats never changed.  And just like other animals, our brains are wired to look out for threats around us all the time.

Whenever we face danger or threats, our brains have protected us with the same strategy over and over again. This strategy is by activating our fight-flight, hide response in our nervous system.

Why are we talking about humans, threats, and survival mechanisms?

By default, humans, as we have previously said, are wired to look out for threats and autistic people are not exempted from these behaviours.

In today’s world, one of the biggest threats for autistic people and the rest of the neurodivergent community is not being eaten by a lion, and it’s not being run over by a stampede… The biggest threat is bullying… bullying from a fellow human being.

Wikipedia defined bullying as the use of force, coercion, hurtful teasing or threat, to abuse, aggressively dominate or intimidate.

Hold on, that’s a lot to take in for me… let’s try again.

In NZ, bullying is defined as a form of aggressive or threatening behaviour — either at school, in the workplace or in the wider community.

There are three areas I found useful that may help parents and carers prevent bullying to an autistic child or even for a neurotypical child..

The three areas are,

Imagine on your way home you see a lion running towards you. At that moment,you felt threatened so your brain activates your survival mechanism. When under threat, you are either going to fight – take a flight or run away – or hide from the threat.

If you have the right tool at hand, you will use all your power to protect yourself and you will fight the lion.

If you do not have any tools at all you will either run away or hide from the lion. In some cases, you might freeze until the lion catches you and eats you.

Regardless of what you do, your body will experience emotional stress and you will lose control of your body because your brain will put all its energy and focus on survival.

Now, the same emotional stress is experienced by the people on the autism spectrum. Their fight or flight nervous system is activated when threatened by bullying.

Just like the lion example, bullying imposes threats because of an imbalance in power. This results in feeling fragile about yourself.

Emily said, regardless of how we define bullying, if you are being bullied you will have the same emotional upset and stress. Stop worrying about the definition because being put down has the same emotional effects. You, as a human being will behave differently emotionally and socially.

To look for signs of bullying, parents and carers know your kids well. And there will be signs that will be significant to your attention.

An example could be, if your child normally sleeps for 8 hours every day but you noticed he/she is now only sleeping 5 hours a day..

Another example is if he/she usually enjoys going to school but lately you experience pushbacks every time you drop off your child at school. And he or she may look scared and unsettled.

These were just examples but it is worth making yourself as a parent or carer aware about any changes in a child’s behaviours.

It is understood that there could potentially be other reasons why a child is feeling stressed but it is important to look at this aspect so you can also rule this out.

Emily has seen about 100 people who were bullied and threatened. The threat doesn’t have to happen multiple times. It only takes one threat of bullying to make a person feel unsafe

Like adults, kids learn social skills and often at a young age, parents and carers should teach their kids how to spot this instance and recognise it as early as possible.

If you are getting on public transport, what usually happens is you will look for an available seat far from inoffensive looking people.

If you see an empty seat right beside someone who looks threatening, you will look for another available seat where you feel you are safe. There is nothing wrong in that instance, and certainly there is nothing wrong with you, this is just how our human brains are wired. We constantly look for threats and avoid them as much as possible.

The behavior is the same with kids regardless if autistic or not.

When kids go to class, they are pre programmed to do the same… if a child looks different, they will be spotted quickly and they are more likely to attract negative attention.

A child who looks different is fifteen times likely to be picked on. As a result, many autistic kids are masking so they won’t be picked on.

Bullying happens not just for autistic kids but also for very smart kids or beautiful kids. Because smart and beautiful kids look and behave differently from average kids. Because there is imbalance in power, other kids will see this as a threat and this could potentially lead to bullying.

If there is awareness and acceptance of our differences and there is mutual respect among all. People can express themselves without being judged and picked on.

The use of fist when dealing with a bully is not recommended. This strategy doesn’t work and never will be….

People get away from bullying because often a lot of people are around it. Not because they support it, not because they agree with it or believe in it but rather it is easier for people to be quiet and not cause attention in the eyes of a bully.

Emily said, we are all neuro diverse, everybody has different ways of thinking. If we support different people thinking differently then we are in a much much better world.

Regardless if autistic or not, kids need self empowering strategies to make them confident of who they are.  We in general need to be aware of neuro divergence. And give mutual respect.

About 200 years ago not all kids were educated and dyslexia was not a problem, but it is now.

Similarly with autism, this was not considered as a huge problem because there are not too many autistic people. Now, statistics suggest that 1/100 is autistic. Noting there are people who are under diagnosed, there are also those who were not diagnosed and those waiting for assessment. This means there is more than what the statistic suggests.

Our society doesn’t recognise how common autism is and we don’t tacle this in discussions publicly hence there is limited awareness of it.

We need more people advocating the neuro divergent way of thinking than people telling the world they need to be fixed.

It is ok to be different if a child is confident but if you’re different and anxious, it is a different story. As parents and carers, we need to teach kids to be confident and get kids to celebrate differences and what they are happy about themselves.

If we embrace the fact that we are all different, different in the way we think, behave, and how we see the world then we can say that the world is a better place for everyone.

That’s my take after watching the presentation Bullying Prevention by Emily Lovegrove.

I Am Lloyd I Am 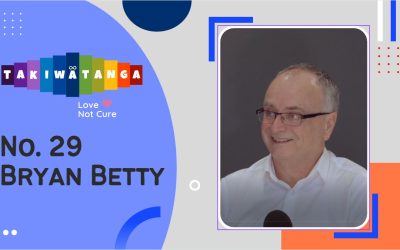 [00:01:01.480] Welcome, Brian. Thank you for your time, Brian. Appreciate it. Pleasure must be here first and foremost. Please introduce yourself, but also don't know you. And that is about the college as well. Yeah, so look, I'm a specialist general practitioner....

Un-edited Podcast Transcript:   [00:00:00.200] I didn't know what I know, being raised the way I was. Would my son have ended up in a really bad way? Like, would he have committed suicide or would he have hurt himself seriously? Just think, there needs to be... Hutt Valley Riding for The Disabled

[00:00:00.120] Disabled is the term that we use. But when we talk about riding and new programs here, we talk about their abilities and strengths rather than what they can't do. Okay. What wakes you up and come here every day and what's driving you to come here every...